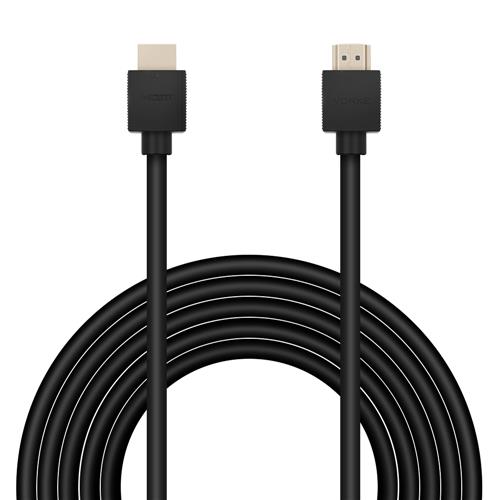 High-Definition Multimedia Interface (HDMI) has become the norm for HD digital devices. It combines audio and video into one convenient cable. The VORKE Basics High-Speed HDMI Cable quickly connects a wide range of HDMI devices. Use it to connect a small mobile, home-entertainment, or gaming device to a big-screen HDTV, large projector, or computer monitor, for example. With the VORKE Basics High-Speed HDMI Cable, enjoy reliable performance and superior playback.

The cable also offers dynamic synchronization of video and audio stream: it can deliver two video streams (dual view) simultaneously and up to four audio streams simultaneously. Even more, the HDMI cable supports up to 32 audio channels and up to 1536 kHz total audio. CEC extensions provide increased command of your electronic devices through a single control point.

The VORKE Basics High-Speed HDMI Cable’s gold-plated, corrosion-resistant connectors (A Male to A Male) deliver optimal signal transfer with lower distortion at the point of contact. This dedication to the digital signal provides sound and picture quality that is truer to the original. The HDMI cable also comes with a durable, black, PVC outer layer and shielding, which protects against outside interference, helping to maintain the integrity and purity of the digital signal.